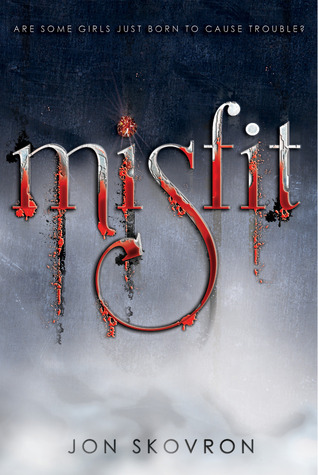 The American Sweet 16 is usually celebrated with a big party and expensive gifts surrounded by friends and family. Yeah, Jael Thompson expects none of that. The only thing she got for her birthday was a note from her father and a necklace from her deceased mother.

Jael Thompson cannot be described as any other girl. When Jael was 8 years old, a bull-like creature made of metal and wood attacked her. That was also the day she found out about her five thousand-year-old mother who was a demoness.

That should be interesting to tell during show-and-tell considering that her paranoid father lets her.

All her life, Jael has been moving from one place to another without any explanation. Of course, she starts attending high school and that’s when teenage attitude starts building up. She has had enough of moving and losing friends.

Jael was determined to stay in one place for as long as possible. That is, until she starts to learn about her inheritance.

In the novel by Jon Skovron, “Misfits”, Jael is exposed to the wonders of being half demon and half human. She starts to learn about her inheritance and the powers she has developed after she receives her demon side from the necklace her mother gave her. “Misfits” is a bit cliché since the book talks about being an unwanted halfbreed, but behind the clichés, Skovron writes about the depth of the human mind that ties in with mythology and religion.

Take a rebellious attitude, paranoid father, hidden talents and a problem of setting things on fire, and we see the life of Jael Thompson: halfbreed and the most hated human in Hell. That would look good in her college resume.

A half-breed being the main character or at least a character of a book or movie is a bit cliché. Many books and movies emphasize how much half-breeds are hated and ridiculed for their mixed blood.

We see that in “Breaking Dawn” with Edward and Bella’s daughter, Renesmee: a half-human, half-vampire little girl that was hated since the day she was born. There was also an order to kill her.

Most people do not like clichés because they get old, but if the reader looks past the clichés contained in the book, the story is very inspiring. The things Jael, her uncle, her father and other characters say dives into the true thoughts of human beings and life quotes that are very true. Many of these quotes aren’t so happy-go-lucky either.

During Jael’s time spent with her uncle, she doesn’t believe in herself. So her uncle tells her, “If you don’t have faith in your own abilities, it’s never going to be anything more than potential.” This quote can be directed to anyone. It can be directed to a high school student trying out for a sport, a teacher’s first day on the job or a child’s first time riding a bike.

“I often came face-to-face with the true darkness that lies within humanity,” a priest from the book says while lecturing his students at a Catholic school. It sounds very dark for a priest. Anyone who has read the novel “Lord of the Flies” or anything similar knows how true this quotation is. The human mind is still a mysterious thing that can be very unpredictable.

The raw understanding of a teenage mind is evident in the book. Readers can relate to the things Jael thinks or talks about because if anyone is put in that situation, the same mindset can be seen. The perfect writing and point-of-view of a teenager is superb since a grown man wrote this book.

The religious and mythological aspect of the book perfectly ties in with the theme. The theme is how humanity can be very judgmental and dark, even if the judgmental part was being shown through demons from Hell.

How the demons did not accept Jael for who she is but what her blood contains shows the misjudgment a human being can make. Just from the information that the demons got about her blood inheritance, they judged her, deemed her an outcast and ordered to kill her. This attitude is seen in today’s society. OK, maybe not the “ordered to kill” part, but the outcast part applies.

All in all, the story behind Jael’s life is interesting even if it’s a bit cliché. Skovron’s writing enhances the human thoughts and perspectives of a teenage girl and the illustrious descriptions Skovron writes sets the reader in the mind of Jael Thompson. The combination of religion and myth entices the readers understanding of Jael’s life.