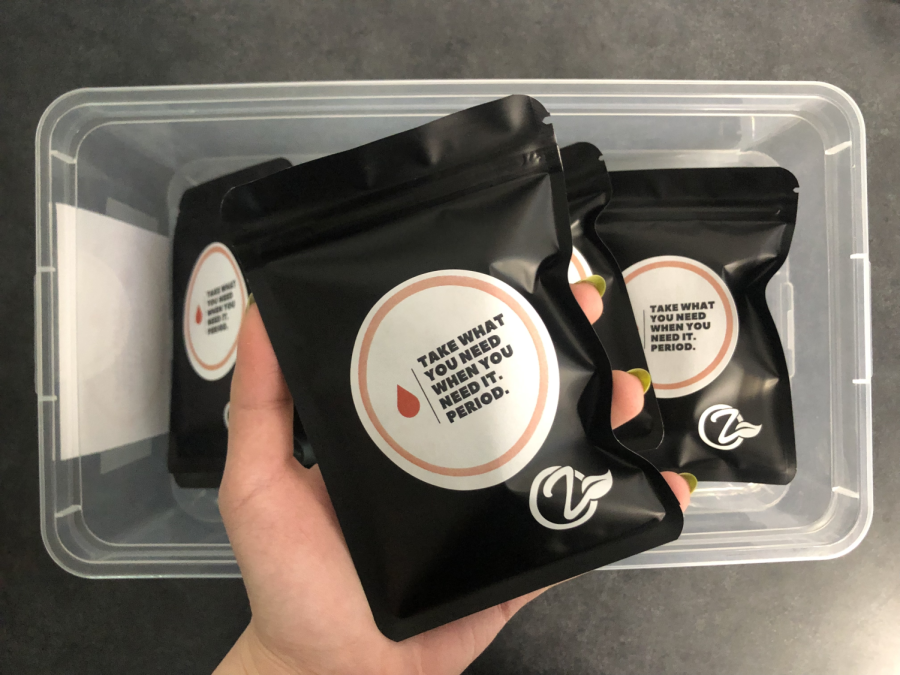 In the girls bathrooms at Elk Grove, many noticed that there was limited access to hygiene products.

“We saw that there sometimes are not stocked products in the bathroom, or perhaps there’s a stigma around having periods, and girls are afraid to ask their teachers,” EG Fierce sponsor Katherine Griffis said.

EG Fierce then stepped in to remove that stigma. Over the course of one hour, members of Elk Grove’s EG Fierce organization made 500 packs of pads and tampons and filled 52 bins with the packs to distribute for EGHS staff members to keep in their classrooms.

The packs will give students greater access to hygiene products. They were distributed at the start of second semester.

“We’re hoping that the supplies get to the girls that need them, first of all,” Griffis said, “and that it helps break down some of the stigma around periods, that they feel comfortable grabbing it from the bin, telling their friends that it’s available, if they have a sister at home that needs it, bringing it home for their family.”

To generate interest in the period packs, the EG Fierce group emailed a survey to all EGHS staff asking if they would like a bin of period products in their space. So far, they received 52 requests from 44 staff members.

“What I thought was really cool is there’s a really good mixture of male and female staff members,” EG Fierce co-sponsor Kristen Lesniak said. “I think sometimes, we think of it like a ‘girl’s problem’, but a lot of our male staff members also wanted to be supportive.”

Lesniak said there was even a request to house a period pack in the gym.

“I thought this was really smart, on both what’s been labeled the girls’ and boys’ side, because we want to make sure to have them available for anyone who menstruates,” Lesniak added.

Before taking this action for Elk Grove students, EG Fierce members learned about period inequity and shame, both globally and in the nearby community. They looked at statistics surrounding the problem and researched organizations working to help remove this stigma and provide access to products.

Then, at their November 2021 meeting, they assembled the bags, put them in bins, and added labels.

“It was really cool because we all just sat down at our tables, and we started working on this right away,” senior Damaris Carbajal said. “When tampons would run out from one table, we would get tampons from the other table, and we shared these items around until they ran out.”

The group members said they worked efficiently together, inspired by the impact they’d make on students and staff.

“I think what means the most to me is how empowered the girls were when we were putting it together,” Griffis said. “They recognize that this is an issue. They wanted to participate and help.”

Carbajal said she appreciated the supportive atmosphere at that meeting.

“It was a really friendly environment, being there for each other in these hard times, just trying to hear each other out,” Carbajal said.

Carbajal has been involved in EG Fierce since her freshman year. The group “gives you more confidence and positivity and just having that extra push to remember that you have to stay positive in hard times,” she said.

Lesniak agreed, saying that she was impressed by the openness of the students as they put the packs together. She said that while they assembled the packs, people shared personal stories.

“I’m just always really impressed by this generation of young leaders and young people that I feel like they’re more open than many of the previous generations and just more willing to have conversations about some of the things that I would have been so embarrassed to talk about,” she said.

The supplies to make the bins were donated by Griffis’ charity and groups she is a part of.

“Mrs. Griffis, huge shoutout to her and all her people who came through with a lot of donations,” Lesniak said. “I’m sure if we put out an all-call to people in Elk Grove, we didn’t even need to do that for this go-around, but I can imagine we’d be able to get a lot more donations, too, which is cool.”

Furthermore, Griffis explained that another idea EG Fierce and other groups at school are considering is starting a “comfort closet” that would offer items for any student, such as toothpaste, deodorant, and more.

EG Fierce meets once a month, with meetings focusing on a variety of topics. All are welcome and can join at any time.

“I’ve actually been encouraging my friends to be in it,” Carbajal said, “and when they asked me what it was about, I told them it was about girl’s empowerment, confidence, trying to be more confident in yourself, having more positivity in life, and that we’re working on projects like the sanitary items, making those kits, and after telling them, they were really excited.”