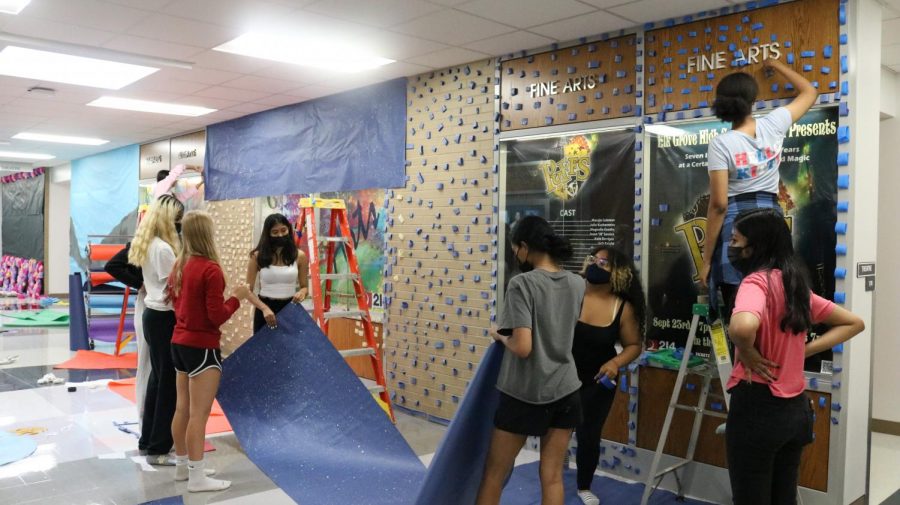 Now that all Elk Grove students are back to in-person classes, the school’s student council was finally able to organize the long-awaited 2021 Fairytale homecoming in October.

But homecoming week looked a little differently this year. The events of the week are a long-running once-a-year tradition, but the student council formed many of its own new traditions for the years to come.

For instance, the homecoming royalty court was redesigned to give more students representation and to make the program more inclusive. Previously, senior couples ran for homecoming together and were not nominated by anyone but themselves. Students voted for their favorite couple and the winner was deemed homecoming king and queen.

“It was always upperclassmen, of course, and it was the popular people,” Pasterski said. “This year is more inclusive and has people from athletics and activities all across the board. I like that it is more inclusive. It’s better this way.”

In the redesigned program, seniors had to be nominated by athletics and activities sponsors in order to run. This way, all students are able to participate and have a chance to be honored for their school spirit and participation over four years.

2021 homecoming court winner Cooper Moellenkamp was nominated by Brian Buccarelli for his participation in the boys golf program.

“My favorite part was probably just all the people we were with. It was a really tight knit group,” Moellenkamp said.

2021 homecoming court winner Stephanie Cuatepitzi was nominated by her counselor, Leslie Alvarez, for her participation in various school activities.

For decorations, freshman and sophomores took over the foyer while juniors and seniors took the hallway leading into Door No. 1. The decorations varied from fan-favorite fairytale movie scenes to beloved Pixar characters that covered the walls. Here’s a rundown of the week’s events that took place:

The first day of homecoming week was Sleeping Beauty Day, during which EG students wore comfortable pajama clothing to classes. After classes, about 60 students drove to a movie night at 7 p.m. to watch “Enchanted” in the back parking lot. A number of students went and sat closer to the screen in chairs and on blankets.

Tuesday, Oct. 5 was Hansel and Gretel Day and EG students had to find a twin to match for the day’s classes. Following school was a window and sidewalk painting activity where students drew inspiration from fairytale movies and stories.

Wednesday, Oct. 6 was the annual bonfire where the newly-designated homecoming royalty candidates were announced and honored. There were luau dancers, and seniors dressed in school colors while underclassmen and staff wore black for Heroes vs.Villains Day.

Thursday, Oct. 7 was Ohana Day, and students wore their Hawaiian gear to prepare for the girls Hawaiian Night volleyball game against Rolling Meadows. The afternoon’s activity, the Amazing Race, was cancelled due to weather.

The final day of homecoming week was Friday, Oct. 8, where students wore white for Snow White Day. Students’ schedules were tweaked to make time for the homecoming pep assembly on the turf field outside, but due to weather, students and staff were moved into the gymnasium and the homecoming coronation was rescheduled for the white-out themed football game at 6 p.m. against Prospect High School.

The Homecoming Dance took place on Saturday, Oct. 9, on the turf outside. Students were allowed to attend without masks and had to purchase tickets beforehand to enter the event. Photobooths, seating areas, and two separate mosh pits decorated the turf for the night.