My Chemical Romance’s reunion a welcome return for inner emos 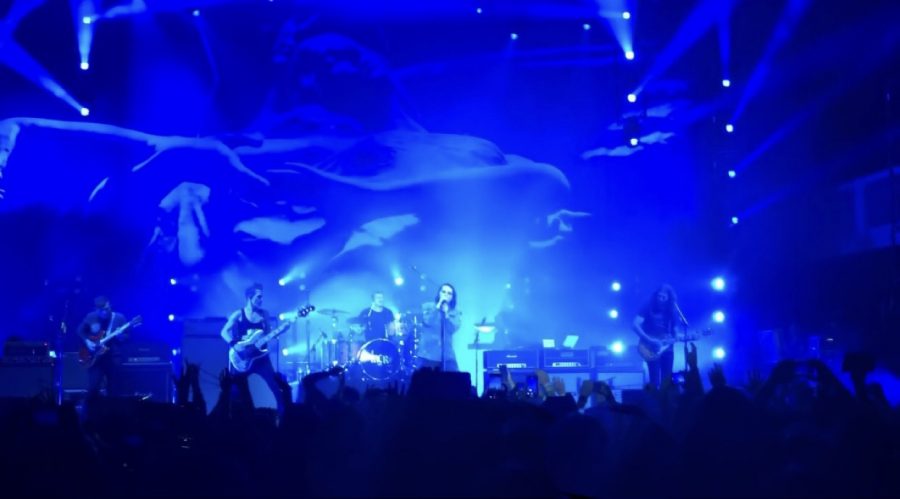 I used to be a little emo.

No, I wasn’t a hardcore anti-social kid wearing all-black clothes. I was living my 12-year-old life with a scene mindset and an emo lifestyle. Just imagine sixth-grade Darina, wearing tattoo chokers and a Fall Out Boy t-shirt struggling to open a locker, but the rubber bracelets she got at Hot Topic kept falling off her wrist and getting in the way of the lock. That was me.

One band that always kept me coming back to relive those emo days is My Chemical Romance.

My Chemical Romance has a specific sound that I just haven’t been able to find in other bands. Their violent lyrics with gothic undertones and narrative elements always fascinated me. Continuous storylines that exist in records like “Three Cheers For Sweet Revenge” and “The Black Parade” tell a story through lyrics and music.

On March 22, 2013, My Chemical Romance decided to disband for what many thought would be forever.

That turned out to be false.

On Halloween, emo kids everywhere rejoiced and lost their minds after My Chemical Romance remodeled their Instagram account. Four images of a sun, a hand, a teardrop and a candle with various captions were posted. A fifth post revealed a brand new logo, leading to speculations and theories that MCR would be a band once again.

Shortly after the mysterious posts, fans and speculators were provided with what they wanted — a date and location for a reunion concert. The band announced its first show in seven years, taking place in Los Angeles on Dec. 20. Fans were ecstatic and tickets sold out in three minutes.

MCR, a New Jersey-based pop-punk/post-hardcore group formed in 2001 after frontman Gerard Way witnessed the 9/11 attacks. Inspired to help others cope with the attacks, Way wrote his first song “Skylines and Turnstiles.” And from there, everything was history. Way recruited “the most talented guitarist” he’d ever seen, Ray Toro, drummer Matt Pellisier, bassist and brother Mikey Way, and rhythmic guitarist Frank Iero to make MCR a reality.

In 2016, the band teased a potential reunion by changing their social media accounts and releasing new “MCRX” merchandise and logos. Sadly, it was not a reunion; MCRX was just a re-release of “The Black Parade,” MCR’s critically-acclaimed third record.

Despite all those little hints of a reunion along the way, fans waited overnight this past December to get first rows and first glimpses of what the band had planned for everyone. Instagram user @dietshampoo became an absolute god to any MCR fans unable to attend the show, thanks to her live-streaming of the entire concert for fans to enjoy.

One could say she was the “savior of the broken.”

The band even added 12 international dates with festivals and arenas to take place in Europe, Asia and Oceania.

MCR received a ton of publicity, buildup and a brand new reputation through the reunion. The band proved that, in a way, emo never died. Despite achieving more than they expected, the band surprised fans with a 13-minute video posted on YouTube. A dramatic masterpiece, the video followed a young boy running through scenes filled with easter-eggs from all of MCR’s past work. Their albums and stories, characters and sets filled the video with non-stop action and definition. At the end of the video, 19 dates accompanied by a city and venue covered the black screen one by one; the dates were a North American tour to take place in the fall.

A stop on the North American Tour list is Chicago’s annual Riot Fest, which is one of the only events in which tickets have not been released, as Riot Fest is a collective festival. All other dates sold out in six hours.

An album as old as I was made me go head over heels for rock all over again. I’m vouching for myself that they changed me in a matter of overnight. Rediscovering them was a journey of middle school throwbacks that threw me back into that emo mindset I had lost over the years.

To be clear, their music never saved me, or anything like that.

But it did change me to be the person I am today.

Take a listen, maybe you might be into morbid scream lyrics, and guitar solos you didn’t know you needed. “So long and goodnight.”