Opinion: Not using your locker? You’re not alone 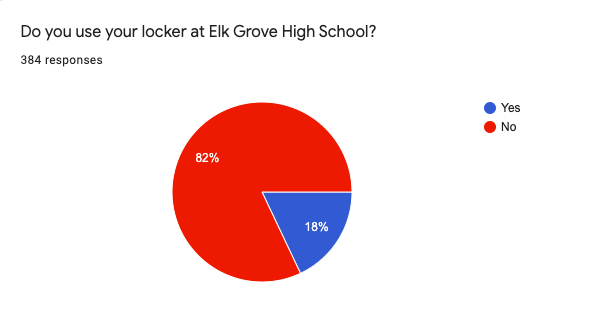 As winter is slowly closing in on Elk Grove High School, you’d likely expect the hallway lockers to get plenty of use, especially  all those boots or jackets students have to put away. Right?

“I have students who come up to me and say, ‘Hey, can I put my bag or jacket here and I can pick it up after school?’” teacher Patrick McGing said. “And I’m like, ‘Dude, you have a locker.’”

Gradually, lockers have lost their use at Elk Grove High School. A Guardian student survey of 384 responses revealed that 82 percent of students who responded said they do not use their lockers, leaving just 18 percent that said they do (see pie chart to the right).

“I don’t even know where my locker is,” junior Colin Arrington said.

I know where my locker is, but I haven’t used it, because I also have a band locker that’s bigger and, in my opinion, it’s a lot safer to use it.

“I use my gym locker to put my jacket away but its small so I shove it into my gym locker” said Maggie Martin.

So people would rather shove a jacket into a really small locker than use the larger, spacier ones in the hallways, which is interesting and despite multiple people I see wear coats in class on a daily basis, this is technically against the dress code.

According to the Township High School District 214 dress code, coats and cold-weather garments are among the items that are “not be permitted while in attendance during the school day or at school-related activities.”

Kyle Burritt, Elk Grove’s assistant principal of operations, has taken note of how the lockers have lost their use at EGHS.

“Most, more than half, but maybe 75% are clearly obvious they haven’t been used in the past year,” Burritt said. “You can tell because there is an inch of dust on bottom of the locker.”

The 2017-18 school year at Elk Grove saw a reduction in passing periods from five minutes to four minutes. This one-minute change meant that students had less time to get from Point A to Point B. Plus, textbooks virtually went extinct around the time the 1:1 iPad initiative was brought to EGHS, as more and more teachers chose to use iPad-centric texts instead of bulky textbooks.

It all raises another question: Are we close to the point where we don’t automatically assign a locker for four years?

For instance, is it possible to start freshman classes and tell students they have a locker and if they even want it?

The questions keep arising. Despite these questions, there are a few positives I see for lockers. Some people find them to store bulky items like coats and backpacks. Some teachers actually still use textbook, and it’s clear that storing coats in a gym locker just isn’t that efficient.

Sure, they can be removed, but that’ll cost a lot, and unless you can get artists to paint the walls, you’re going to end up with barren walls that no one will like. It’ll feel weird about walking in a hallway with no lockers. They’re nostalgic of those high school movies we watched as kids, such as “High School Musical,” “Mean Girls” and “The Breakfast Club.”

Overall, lockers have proven to have that nostalgic, high-school feel to them. But what can be done if more and more students realize they don’t need them?