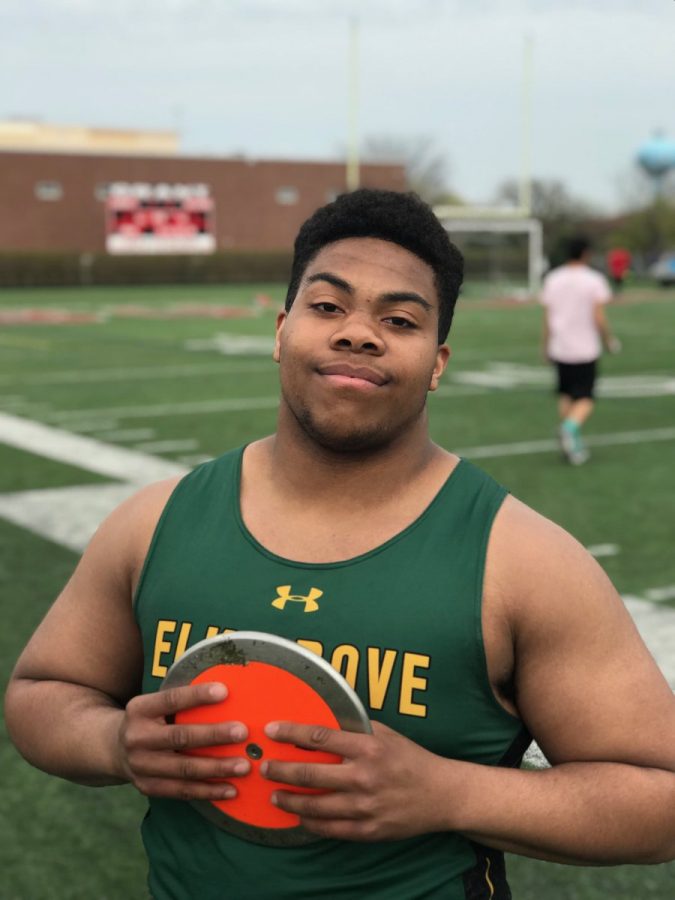 After meets, track coach Brian Bucciarelli’s team will board the bus back to Elk Grove. He’ll look around the bus and notice something out of the ordinary.

When all of the other track athletes are sleeping, DeVaughn Tillman, a senior thrower and three-sport athlete, is on his phone working on Schoology and with papers out doing homework.

Senior DeVaughn Tillman has always hustled to perform his best. Whether it was academically, or as a member of the football, wrestling and track teams over the course of his four years at EG, Tillman always pushed himself past his limits.

“I think once he graduates, he’ll be remembered as the quiet, motivated, humble role model for the underclassmen,” Bucciarelli said.

Oh, and Tillman has worked a part-time job on top of all that.

“I’d like to be remembered for being a dedicated student athlete,” Tillman said. “I feel like every day I go onto the field, step onto the mat, or get ready for a track & field meet, that no matter how tired I am or what’s going on, I’ll always try as hard as I can and play to the best of my ability.”

Sports haven’t been on all he’s had to work on though. As a three-sport athlete, he’s had to balance a rigorous schedule with long after school practices.

“It’s difficult when you’re in AP classes and maybe you don’t get something, but you can’t get help after school because you don’t have free time, so I’ve found that I have to push myself harder on the academic side of things,” Tillman said.

But despite that pressure, Tillman looks back on his four years fondly. One of his favorite memories was defeating Wheeling High School in football on Homecoming, which marked EG’s first football victory since 2015.

“Sports have definitely molded my character and how I am today,” Tillman said. “They taught me the keys to being a good leader, how to battle life, and create new friendships. I try to help the young guys out while they’re struggling and try to make them more complete athletes.”

Tillman is heading off to Harper College to pursue his education over sports.

“I feel like, going forward, the sports that I play have to take a backseat to my education so that I can really focus,” Tillman said.

He said he wishes to pursue a career as a community or social worker.

“I’m big on putting people before myself, and I feel like it’s the perfect line of work for my personality.”