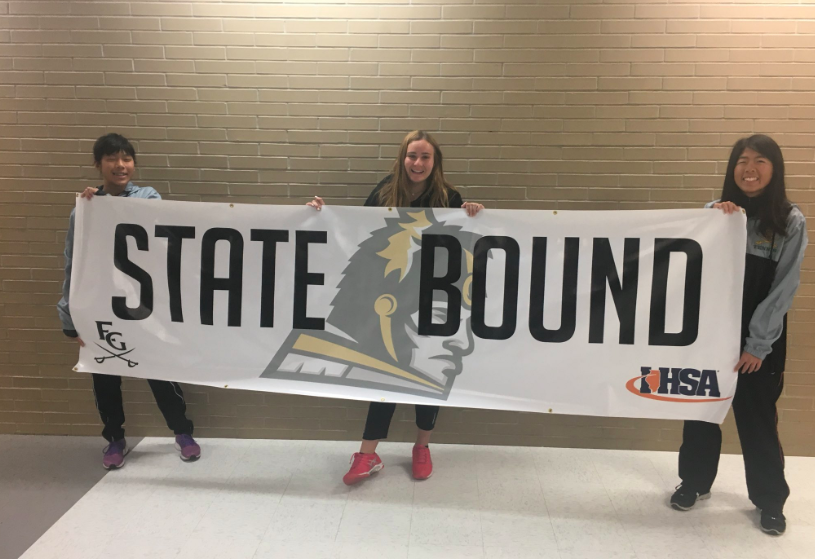 On a chilly and calm Friday, Oct. 19 morning, Elk Grove High School tennis-playing siblings Lauren and Peyton Oda were already on the EGHS courts. They were fronthanding, backhanding and refining their technique for an upcoming doubles match at the school.

About eight miles west of EGHS, senior tennis player Jovana Vujanic was also representing the Grenadiers, this time for a singles event at Schaumburg High School.

That day, all three girls had their eyes set on the same prize: the Illinois Girls Tennis State tournament. They were ready to go.

“I feel ready to compete in general, mainly because of the fact we’ve been practicing all season,” Lauren Oda, a senior, said during an interview before the event.

Although none of the three EGHS athletes ended up placing in their respective events during the tournament, the Oda sisters and Vujanic possessed a successful 2018 season.

Lindsey Rapinchuk, who is an assistant coach for girls tennis team, echoed that sentiment.

“We are really happy with the progress they made this year,” Rapinchuk said. “We had a great showing at our tennis conference, so I was really proud of my girls.”

Both the Oda siblings and Vujanic were eliminated after winding their way through state competition. Vujanic took her first-round match by defeating Niyanthi Puliyala from Barrington High School 6-4, 3-6, 6-2. After dropping her second-round match 6-2, 6-2 to Maria Goheen from West Aurora, Vujanic lost her second-round consolation match 6-4, 4-6, 13-11 against Marta Krakowski from Elgin High School.

The Oda sisters paved a similar path. They lost their first-round doubles match 6-3, 6-0 against Samantha Choi and Emily Orlove from Wheaton Warrenville South High School. However, the Oda siblings managed to win the first consolation round against Kamila Wolowiec and Emily Garcia from Amos Alonzo Stagg High School.

They dropped the next consolation match 6-4, 4-6, 10-7 against Mounika Gadiraju and Kathleen Tomasian from Barrington, ending their tournament chances.

Despite the losses, the Oda siblings credited their teammates for their postseason-qualifying runs.

“It’s been very supportive this season,” Lauren Oda said. “Your teammates always come to support you, and they always cheer you on.”