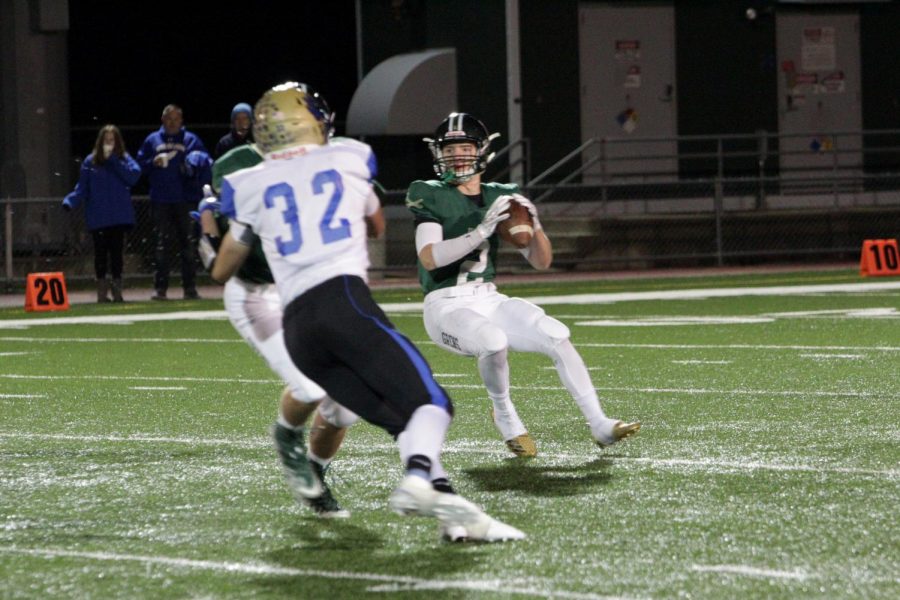 Photo courtesy of LifeTouch via the EGHS Athletics Department

The scene is set 1,084 days ago. It’s a chilly Oct. 16 night at Prospect High School. Elk Grove High School’s fans are still passionate about supporting their Grenadiers all the way to the victory, and that night was no different.

It was then that the Grens beat Prospect 47-31 in a hard-fought game to give EG a record of 2-6 at the time and 2-7 for the season. The only students at EGHS to have seen their school win a football game is the senior class.

That is, until now.

Three years later, the Grens have scratched and clawed to get that long-awaited win. With head coach Miles Osei at the helm, the Grenadiers finally pulled out a win against a 3-2 (now 3-3) Wheeling team.

The journey led them to the Homecoming game. The stands were packed with a bright fan section thanks to that night’s white-out theme. The wind was seemingly knocked out of the fan section when Wheeling went up 8-0 early, but the electricity returned when the Grens pulled a trick out of their sleeves with a three-man hand off that ended up in junior receiver Shane Crimmins’s hands for a 75-yard touchdown.

What followed was a 3-yard rushing touchdown from running back Ian Ridge. Just before the end of the half, junior kicker Antonio Sandoval drilled a 28-yard field goal to bring the score to 18-15.

“We came out after the half with the mindset that it was a 0-0 game in the 1st quarter and we had to get the lead and take the game,” Osei later stated.

After receiving the kickoff to start the third quarter, the Grenadiers were quick to score as Ridge ran in another for a touchdown. He’d score another in the beginning of the fourth quarter. Ridge ended the game with 200 yards and 3 touchdowns.

The atmosphere quickly shifted to something quite unfamiliar for Gren fans. The student section was full of smiles, and the same excitement from the beginning of the game was still tangible. A fourth-quarter Wheeling touchdown was too late for any sort of comeback.

As the clock ran down and the scoreboard read 38-21, the Grenadier faithful slithered down to the track and counted down until the clock hit 0.0 seconds. The fans stormed the field and celebrated with players and coaches. Fireworks lit up the skies as celebratory music blasted through the stadium. The night ended cheers, tears and redemption for EG.

“It was definitely nice to win, and I think it helps the kids understand that if they invest enough throughout the week, you can take home the win,” Osei said. “I think that’ll stick with them.”

For Osei, the rebuilding started with getting his team in the right mindset. In Osei’s own words prior to the Wheeling game, “We have the kids to do it [rebuild the team].”

After stand-out seniors like Mike Clausen, Genio Hyppolite and Tyler Selvic graduated and left holes in the team’s lineup, there were certain Grens that had to step up and mold the team. Tim Varga and Andrew Clausen are two of those players.

Because of Clausen’s vertical advantage as a linebacker and Varga’s explosive rushes to snag the quarterback, they’ve become dominant and useful weapons in EG’s arsenal. According to Osei, Clausen and Varga demand the most of their teammates.

Clausen’s had no trouble getting stops on defense. He sacked the quarterback twice and helped on a third in a Week Three 34-7 loss against Maine West. Nate Blankenship has shown great improvement switching from playing running back to a linebacker in the past month. Blankenship picked up a sack and intercepted a long pass in a Week Four 31-14 loss against Glenbrook North, and he gave the Conant High School defense a tough time in a 33-10 defeat in Week 2. In that game, Blankenship stepped in as the starting running back.

On the offensive side of the field, junior quarterback Charlie Janczak has improved at leading the offense and dictating the pace of the game. While he can throw the ball with ease, if he needs to, he can scramble out of the pocket and burn the defense on a run like he did in a tight first-week 28-21 overtime loss against Hoffman Estates when he ran half the length of the field for a touchdown.

Janczak’s life in the backfield is easier thanks to aforementioned running back Ridge. Ridge is a speedy and elusive back who can get through the defense with ease. According to his coach and teammates, Ridge has been a huge help to the team who only keeps improving. Ridge helped the Grens fight forward when he rushed for 71 yards on 11 carries in a 42-20 loss to Rolling Meadows the week before the Grens’ first victory.