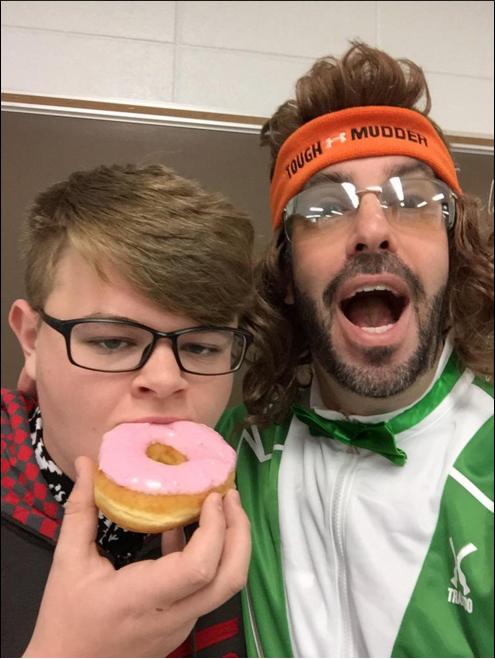 Sporting a stylish headband and sunglasses, Mr. PBIS became a school legend a few years ago, which is why it shocked the EG Nation when he made the startling change from a blue track suit to a green one.

The news excited some students while others were uncertain of what a “Mr. PBIS” was in the first place.

“Personally, I’m extremely excited about the change and that it’ll represent the school,” sophomore Sam Uhlarik said. “I’ve been wanting it for a long time.”

The grand reveal occurred when Mr. PBIS toured the school, passing out doughnuts to students. Mr. PBIS was spotted around the hallways and in classrooms, raising eyebrows to the observant few.

Other students were more reluctant to accept the change, believing that it violated some sort of continuity seeing as the old version of the costume appeared on T-shirts and in the 2015 yearbook.

“Mr. PBIS should stop worrying about the color of his 1975 sweat suit and get rid of that nasty wig,” senior Brendan Winkler said.

The student body is divided, as the reasoning for the change remains unclear. The elusive Mr. PBIS has yet to make an official statement regarding his tracksuit. Regardless, Mr. PBIS will likely show off his suit in one of the upcoming pep assemblies.