EG, BG students to receive iPads next year; rest of District 214 schools to follow in 2016 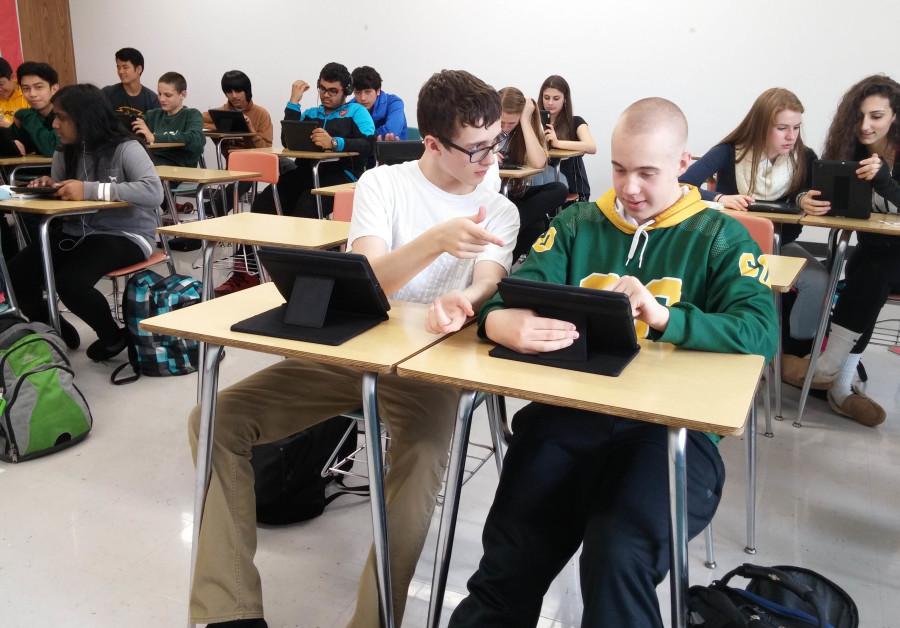 THE DIGITAL AGE: Freshmen Kevin Clauson and Michael Clausen benefit to the fullest extent from their iPads as they study for an upcoming AP Human Geography test. Several years ago, the class was entirely pen and paper; now, most classwork is online.

District 214 has been at the cusp of cutting edge technology in recent years. The addition of computer labs, technology-based courses and more recently, the iPads, has kept the district ahead of the the curve. The trend seems to be continuing, as next year iPad implementation will be 1:1 here and at Buffalo Grove High School, meaning 100 percent of students will have iPads. By 2016, the entire district will be 1:1.

One of the main benefits of giving every student an iPad is more immediate feedback from teachers and help for students through the internet. Apps like BaiBoard allow teachers to conduct review sessions online that students can log into and join in the discussion.

“Teachers can do review sessions with kids now in their pajamas,” Knight joked.

Although the iPad makes learning more accessible to students, they have also become a major distraction for some. It is hard to find students who are not playing games, texting or, according to freshman Will Warszewik, even Facetiming during class.

“About 90 percent of our students have iPads this year,” principal Paul Kelly said. “I don’t think there will be a significant [behavioral] change from this year, but I do think students and teachers will need to find a balance between the fun appeal of an iPad and the focus that is needed to be successful in class.”

The announcement of the 1:1 pilot has received mixed reactions from students and teachers alike. Italian teacher Ralph Scalise is not looking forward to the increase in iPads like some are.

“We have computers that do a better job than the iPad does,” Scalise said. “It’s nice to have that convenience in the classroom, but now teachers have to be on the look out for kids not paying attention in different ways. I honestly don’t think it’s the be-all and end-all of anything.”

Knight believes it is the job of the administration department to professionally train the staff to utilize the new technology and engage students in the digital age, despite the array of available distractions.

Many freshmen and sophomores, who have never experienced high school without iPads, are responding positively to them.

“I feel that [the iPads] make schoolwork much easier than in junior high,” freshman Kevin Clauson said. “It’s easier to organize documents. It takes up a lot less space.”

Warszewik, on the other hand, would rather not have iPads in school because kids around him can easily distract him from his work.

With the convenience of the Internet in classrooms now, some students and staff members have wondered what will become of the computer labs.

“The goal is to maximize the use of the iPad as a tool and what we’re seeing is that students are using iPads for all the things they used to use computers for,” Knight said. “We’re very cognizant of the fact that there are specialty programs that need desktop computers. It’s not about getting rid of them; it’s about striking a balance based on the needs of the building.”

According to Kelly, there will also still be textbooks at EG for the foreseeable future, contrary to the March 31, 2015, article in the Daily Herald. There will be more online resources for students, but physical books are by no means obsolete.

“There’s going to be an iPad pilot in PE [and] in student services. Every facet of the building is involved in it,” Knight said. “It’s a huge testament to the creativity and innovation of the staff because they know that this is what’s best for kids.”