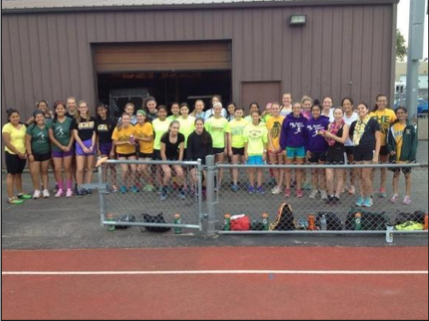 “Our better is better than everyone else’s better.”
For the girl’s cross-country team, this quote resonates with them because it means that their team is improving more than the teams they face.

“The key to being a good team is not being a group of fast runners, but having girls who are committed to running every single day, in season or not,” junior Inga Augustaitis said.

In turn, this is leading to their team getting faster and faster with each passing day in a workout, a long run, and even on a recovery run.
Some of their other quotes, mentioned by Becky McDonough, that are well-known on the team are “train insane or remain the same,” which is featured on this year’s cross country sweater, and “we run for fun and personal best,” which is their reason for why they run on the team.
To prove that they are becoming better, they beat Buffalo Grove on the varsity level on Sept. 16, which has not been done in over 20 years at Elk Grove High School.

Not only are they getting faster, but they have also been growing in numbers considerably with each year. Due to so many more members, they had a fundraiser called the Run-A-Thon this summer to get new warm-up jackets for the team. The team was split into groups of 5-6 girls who had one girl constantly running on the track; they switched runners every miles. The fundraiser started at 5:30 A.M. and finished 4 hours later.
Their team chemistry is stronger than ever; the teammates have a strong bond with one another, which in turn makes running cross country a fun experience. Most girls come out and join cross country because of their friends. The team atmosphere is very positive every day and during every race they are always out on the course cheering each other on.

“It’s a lot of fun and it’s like a giant family,” junior Hannah Olson said.
Everyone on the team just wants each other to succeed and reach their PR, or personal record, during every meet. It is clear that this year EG have an exceptional girl’s cross country team.

“It’s amazing how much we all care about each other. This is one of the strongest teams we’ve ever had and it’s not because we’ve been training better, but because we all push each other to be the best runner we can be,” senior Autumn Carney said.